Caitlyn Jenner had the huge media splash to celebrate her coming out. On its face, there’s a conservative Christian in me who’s repulsed at the idea of writing the first sentence of this blog posting. Upon reflection, though, it has to be the right answer. I want to impose what I believe to be the right answer on the idea of transgenderism. In so doing, I am answering with my prideful knowledge of what is in the Bible, and ignoring the One whom that Bible is all about. As long as Bruce Jenner wants to be Caitlyn Jenner, that’s where she is.

There are a gracious plenty in the left media culture who would throw the bait of Jenner’s situation out to a conservative, maybe even a presidential candidate. When the conservative gives an answer that is critical of transgenderism, or even expresses a lack of understanding, the leftist media gets to “confirm” their narrative that conservatives are heartless bigots. The left media loves it when their narrative can be confirmed, and hates it when they’re proven wrong. If it doesn’t fit the mold, it’s unlikely to make the news. And in the middle, the true victims are actually not the heckled conservatives. The victims are the ones who identified as transgender. Their difficult situation is made harder and more confusing by people who don’t have any skin in the game.

As a Pastoral Counselor, training and experience has taught me that solutions to the dilemmas of life are as unique as the problems solved and the people afflicted. One of the hardest lessons that I had to learn was that I was never in control and my will had very little to do with other peoples struggles. If I wanted to serve the cause of Jesus Christ, I had to learn to emulate Him. That is exactly what Jesus would do. Examine Christ’s interaction with the woman the Pharisees brought to Him, who was caught in adultery.

John 8:4-11 (NLT)
4 “Teacher,” they said to Jesus, “this woman was caught in the act of adultery.
5 The law of Moses says to stone her. What do you say?”
6 They were trying to trap him into saying something they could use against him, but Jesus stooped down and wrote in the dust with his finger.
7 They kept demanding an answer, so he stood up again and said, “All right, but let the one who has never sinned throw the first stone!”
8 Then he stooped down again and wrote in the dust.
9 When the accusers heard this, they slipped away one by one, beginning with the oldest, until only Jesus was left in the middle of the crowd with the woman.
10 Then Jesus stood up again and said to the woman, “Where are your accusers? Didn’t even one of them condemn you?”
11 “No, Lord,” she said. And Jesus said, “Neither do I. Go and sin no more.”

So, after reading Christ’s reaction to the woman in John 8:4-11, how should a conservative be expected to react? Rick Santorum gave an answer that surprised many in the left media.  Click this link:

Santorum had the answer that a Christian who’s digested the gospels should have. Jesus met people where they are. He didn’t condemn lost sinners. Jesus loved, healed and met lost sinners where they were… most of the time. He did hold out a rougher edge for those who had knowledge of the Scriptures, but mocked God with their pride and arrogance. One such example of Jesus’ tone to religious people occurred after he was criticized for not following the Jew’s religious hand-washing ritual:

Luke 11:39-41 (NLT)
39 Then the Lord said to him, “You Pharisees are so careful to clean the outside of the cup and the dish, but inside you are filthy—full of greed and wickedness!
40 Fools! Didn’t God make the inside as well as the outside?
41 So clean the inside by giving gifts to the poor, and you will be clean all over.

At this point, my pridefulness wants to chastise my Christian brothers and sisters for the arrogant “squeaky clean” act that some show the world while hiding their own hypocrisy. I’m unable to chastise anyone, though, as the plank in my own eye won’t let me have a clear look at them. Instead, I think it is better to meditate on why Christ was so inclined to not condemn the lost sinner.

Left to my own plan, I can launch off into the wrong direction. Pridefulness will keep me moving briskly along, and hubris will assure me that I’m doing the right thing. It is because I’ve recognized this flaw in my own conduct that I can help others find the bugs in their own self-assessment. Notice, it isn’t me, the counselor, finding the bugs in the care-seeker, but them finding the bugs themselves. If I, or another Christian, look toward God long enough and diligently enough, God will help us find the answer He wants us to find.

I’ll depart from my ultra-conservative counseling colleagues at this point, to mention that God offers us more than the book of His Word to guide us. He also offers the book of His works. Medicine and psychology, done with an eye toward the whole person, offer great healing as they were created to heal by people created by God and things provided by God. It is where medicine, psychology and faith meet that what appear to be the best solutions are found for the people struggling with transgenderism. 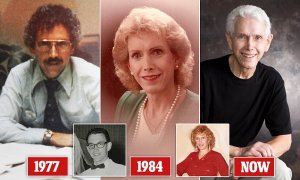 I credit CNN on the morning of Tuesday, June 2nd for airing an interview with a pastor by the name of Walter Heyer. Walter struggled with transgenderism from an early age, and when he was in his 40’s he “transitioned” into what he thought was a woman. He spent 8-years living as a woman, and then, through a determined and patient pursuit of God for healing, he transitioned back into the male self as he’d been born into.

Heyer describes the process of living in the closet as a transgender person, and about transition into a female identity and then back into a male identity. His unique perspective offers everyone who is not so afflicted, a look into the mindset that drives a person into desiring and fulfilling the desire to be another gender. Though it is complex, and a long-suffering process, Walter not only found his way back to the gender of his birth, he discovered along the way the depths of psychology and medicine that are involved in the world of the transgender.

As I finish this blog posting, I want to leave you with a link to view Walter’s 14-minute interview with a radio station that occurred about 2-weeks before Caitlyn Jenner was revealed to the world. Before I go, I want to encourage Christians to look deeply into mind of Christ in Scripture, and meditate. Don’t meditate on the passages that tell why sin is wrong. Instead, meditate on how Jesus, time and time again, meets the sinner where they are at, and lovingly bridges the gap between mankind and God the Father.