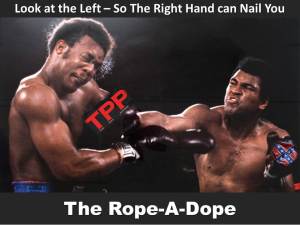 If you’re noticing a big flap that is full of symbolism, divisiveness and partisanship is afoot, you’re paying attention to the news.  If you are unaware that the US Senate is about to pass a massive, sweeping trade agreement that will severely injure the country, you’re normal.  Very few people on earth know what is actually in the Transpacific Partnership, or even know what giving the president Trade Promotion Authority is all about.  For years into the future, you will feel the effects of TPP and TPA on our nation.  And the North and South are divided, the races are divided, and the spin-machine is working flawlessly.  Our nation is about to be like Frazier being clobbered by Ali, with Ali’s famous “Rope-a-dope” maneuver.

Social media, particularly in the South, has been ablaze about the South Carolina Confederate Flag Flap.  In the wake of the Charleston Massacre, Governor Nikki Haley, flanked by politicians from both parties, called for the Confederate Battle Flag to be taken down off the statehouse grounds.  The Southern White Conservatives have been infuriated that the leftist seem to be getting a symbolic win just because they were “offended”.  The SC legislature will have to have super-majorities in both the Senate and the Congress to accomplish the removal of the flag from statehouse grounds.  The spin-cycle is being driven from both sides, and it is drowning out a tremendous amount of media attention, and public attention. 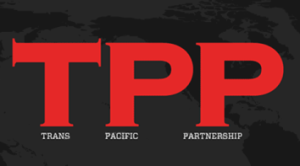 At the same time, the US Senate is taking up the TPA authority that will allow the TPP to be negotiated by the president.  The TPP is a vast and sweeping trade agreement that some have said dwarfs the historic NAFTA as a jobs killer for the US.  600 corporate lobbyists crafted this agreement in secret, and very few on Capital Hill have actually even seen the details.  Wiki Leaks has published a stolen draft of the agreement, and it includes ceding judicial authority away from the Supreme Court to an unelected foreign arbitrator, “evergreening” by drug companies that will keep patents alive forever and killing generic drugs, and making your Internet Service Provider responsible for spying on your every online move and reporting it back to the US government.  In short, this is the knockout punch that is busy passing the senate today, while our attention is focused on the flag flap.

There are high emotions on the Confederate flag issue, and the timing is perfect to give cover for the TPP/TPA vote in the Senate.  This happened recently when the extended enrollment period for Obamacare signups fell short by 3/4 of the needed participants, thus imperiling the ACA budgeting process to be very quickly insolvent.  The budget is being crushed by a lack of participation, and an inability of congress and the president to agree on anything to do about it.  As Obamacare crashes our budget, we will not be able to borrow money from China fast enough to keep our whole budget going.  What is interesting is, right when this massive financial failure of our government was occurring, we were focused on Gay Wedding Cakes and the RFRA laws in Indiana and Arkansas.

The Religious Right has been grossly abused by the leftist governance of the current president.  They have also been victimized by the psychotic hysteria of the LGBT lobby for anything that falls short of Big Gay getting its way.  RFRA was the one piece of legislation that could provide legal cover for religious traditions that disagree with homosexual unions and lets Christian-owned businesses avoid participating in so-called “gay weddings”.  While the huge flap about a social issue had our attention, an issue that doesn’t mean much to the financial health of the nation, the ACA quietly went unfunded.  Right as the current president is leaving office, the ACA will crush our economy unless struck down by the Supreme Court or fixed by the Republican-majority congress.

Once again, we’ve been duped.  We’re being purposefully misdirected, right before we’re about to take a big punch.  Perhaps the biggest misdirection is to think that any of these issues will matter in 25-years.  We’ll spend a lot of time on them.  It’s time that we could be using on focusing on our families, on improving other people’s lives, and on knowing and loving God.  The hard truth is, very few of us can do much about any of the conflicts that dominate social media and other outlets.  Perhaps the bigger Rope-a-dope is happening right under our noses in how we let the things of this earth distract us from the things of our Lord.

Yes, the real Rope-a-dope is not paying attention to a medium that will be here 25-years from now, and much more.  Until Jesus calls us all home, His word is the really important thing we should pay attention to.  Satan will throw all kinds of conflicts in front of our eyes, expecting us to jump on them.  We jump, we sin, and then he gets the “thin edge of the wedge” in between us and God.  If we keep jumping and sinning, He will keep putting out the bait.

God’s Word speaks to this in many places:

1 Peter 5:8-10 (NLT)
8 Stay alert! Watch out for your great enemy, the devil. He prowls around like a roaring lion, looking for someone to devour.
9 Stand firm against him, and be strong in your faith. Remember that your Christian brothers and sisters all over the world are going through the same kind of suffering you are.
10 In his kindness God called you to share in his eternal glory by means of Christ Jesus. So after you have suffered a little while, he will restore, support, and strengthen you, and he will place you on a firm foundation.

False apostles misdirected the church many times, probably none more impactfully than in the church in Corinth.  Paul writes about these “rope-a-dope” artists:

2 Corinthians 11:13-15 (NLT)
13 These people are false apostles. They are deceitful workers who disguise themselves as apostles of Christ.
14 But I am not surprised! Even Satan disguises himself as an angel of light.
15 So it is no wonder that his servants also disguise themselves as servants of righteousness. In the end they will get the punishment their wicked deeds deserve.

Perhaps the greatest tragedy going on in the flag flap is that it has taken our eyes off of the real suffering of racism, and the victims families in the Charleston Mother Emanuel Church shooting.  We should be focused on doing the work of loving and coming along side our sisters and brothers in Christ.  Let’s let Jesus have the final word in this debate:

John 10:7-10 (NLT)
7 so he explained it to them: “I tell you the truth, I am the gate for the sheep.
8 All who came before me were thieves and robbers. But the true sheep did not listen to them.
9 Yes, I am the gate. Those who come in through me will be saved. They will come and go freely and will find good pastures.
10 The thief’s purpose is to steal and kill and destroy. My purpose is to give them a rich and satisfying life.