Christians Dealing with the Dirty Tricks of the New Media

Jesus instructs Christians to be shrewd as snakes, but gentle as doves.  Participating in angry, judgmental, mean-spirited events does not speak to Jesus in a believer, and is not gentle as a dove.  Still, like never before, we have to be shrewd as snakes preparing our hearts and minds to assess the world as it is, in particular the evil that would lie to us. Before we can get into the modern dirty tricks that defeat Christians, we need to revisit truths about evil that have survived for thousands of years. Evil has adapted its delivery methods to the world of 2015 but its core tactics remain consistent. God has written things on all of our hearts. We don’t even have to be saved to discover that we have the fingerprints of our Creator. Have you ever wondered why we have an innate sense of right and wrong, saved or unsaved? The Apostle Paul explains:

Romans 2:14-15 (NLT)
Even Gentiles [non-Jews], who do not have God’s written law, show that they know his law when they instinctively obey it, even without having heard it. They demonstrate that God’s law is written in their hearts, for their own conscience and thoughts either accuse them or tell them they are doing right.

There is no honest debate that can defeat what God has written on our hearts. But, we do well to bear in mind who attacks Christians, and how he does what he does. Satan has a limitless toolbox of dirty tricks at the ready to battle for the souls of Christians. Those who tell you Satan isn’t real, or isn’t an eternally perilous foe, are working for him.

Recall the Garden of Eden:

Genesis 3:4-5 (NLT)
[Satan] “You won’t die!” the serpent replied to the woman. “God knows that your eyes will be opened as soon as you eat it, and you will be like God, knowing both good and evil.”

Issues of the modern world of 2015 are not unlike the ancient world of Corinth in 55-56 AD. People stirred up controversies because of fierce individualism, sexual immorality, lawsuits among believers and other behaviors that work against the Greatest Commandment and the Great Commission. Even worse, the Corinthian church was allowing solid teaching to be corrupted by a few, unchallenged. The Corinthians blithely tolerated half-truths and whole-lies that infected the Gospel message:

A half-truth is a whole lie. The gospel of Jesus plus anything is no gospel at all. Today, Satan is still selling the old lies: (1) Satan & Evil don’t exist, (2) Sin has no consequences for those who deny it, (3) If it seems good, or feels good, do it despite what God’s Word says… “You won’t
Die!”

In 2015, Satan has used his old tactics in modern ways. He uses social media, new media and mass media to sell his poison. God’s people are seduced by sin and publicly, permanently subjected to scorn. Satan’s messengers collude to amplify lies and sway public opinion to gain political and financial power. Evil is dressed up to appear as good and godly. Let’s take a look at specific weapons:

• Viral web posts: They appear docile and fun. Who doesn’t like Grumpy Cat or a Slow Loris? But scantily dressed bodies and perversely written fake news also go viral. Murderous anti-Christs can use it to recruit the weak-minded into jihad. As fun as viral posts may be, they can magnify the opportunity for evil to travel a light-speed around the planet.

• Astro-Turfing: The political left are famous for using Twitter and Facebook to create the appearance of mass-hysteria to sway public opinion. Human beings are easily swayed to go along with what appears popular. By employing a small network of net-savvy activists, the left assumes multiple identities per activist and work off of coordinated talking points. Accomplished AstroTurfers can turn 12 activists into the appearance of 288 “outraged” citizens burying news and opinion that is antithetical to their cause. LGBT activists used this very effectively to sway corporations a news outlets. While only 3% of the populations, they swayed half of the United States’ public opinion. 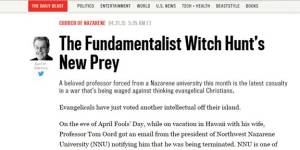 • Echo-Chambering: 3-4 reporters or editors of one political inclination can smear another political position. The activists all take an angle and write about a fake event or movement, creating an appearance of a wide-spread dubious conspiracy from a sliver of half-truth or outright fabrication. For example, a handful of extremist left bloggers (Salon, Daily Kos, Daily Beast, etc) got wind of an obscure notion talked about by a handful of discredited right-wing activists that involved creating a theocracy of the U.S. The bloggers fabricated “The Dominion Movement” and all wrote about it, creating the appearance of a vast, right-wing conspiracy to impose theocracy and stone sinful children in the street. Most of the readers won’t fact check, and the echo-chambering sticks, even though a simple Wikipedia search disproves the product of the echo-chamber.

• Fake News Websites: In a self-inflicted wound, many in the Christian-right fall prey to websites that seek “clicks” for an outrageous, often fake news story. The right-wing will see stories in their Facebook feed about political topics that bait their victims into websites that then direct to dozens of eye-catching for-profit sites. Calling themselves “Opposingviews.com”, “Western Journalism” “World News Daily” and other legitimate-sounding names, these sites are famous for creating reactions with half-truths and whole lies. By reacting to or sharing fake news, people appear to be gullible and also decimate their own credibility. They unknowingly spread pornographic or fake diet pill sites to friends of a similar faith or political inclination.

The media may be new, but the tricks are old.  To keep from being personally defeated, maintaining conscious contact with God goes a long way to preparing us.  The Apostle Paul offers a highly visual metaphor to instruct Christians how to resist evil.  To the Ephesian church, he writes:

For we are not fighting against flesh-and-blood enemies, but against evil rulers and authorities of the unseen world, against mighty powers in this dark world, and against evil spirits in the heavenly places. Therefore, put on every piece of God’s armor so you will be able to resist the enemy in the time of evil. Then after the battle you will still be standing firm.  Stand your ground, putting on the belt of truth and the body armor of God’s righteousness.  For shoes, put on the peace that comes from the Good News so that you will be fully prepared.  In addition to all of these, hold up the shield of faith to stop the fiery arrows of the devil. Put on salvation as your helmet, and take the sword of the Spirit, which is the word of God.

As we are engaged in the Great Commission, we need to bear in mind the caution Jesus gave His disciples as He sent them out on the very first Christian missionary journey:

“Look, I am sending you out as sheep among wolves. So be as shrewd as snakes and harmless as doves. 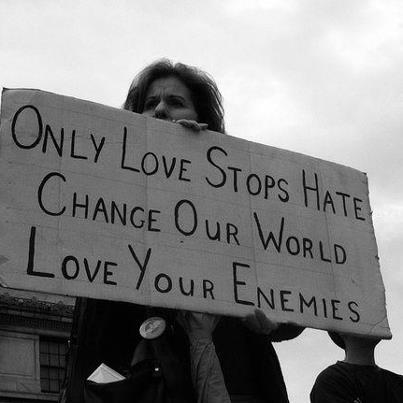 Dirty tricks are business as usual for the lost who ignore the conscience given them as Paul described in Romans 2:14.  It is what we should expect, and love people regardless.  God takes us all as broken and prideful.

Perhaps the dirtiest trick that defeats a Christian is the brokenness and pridefulness that still resides in our old selves.  How Christians respond to the evil visited upon us is what sets us apart.  Condemning, judging and hating is the evidence that we have taken the bait of evil, and are doing our enemy’s work.  Paul admonishes Christians to respond to being wronged by others in Romans 12, where he writes:

Never pay back evil with more evil. Do things in such a way that everyone can see you are honorable.  Do all that you can to live in peace with everyone.  Dear friends, never take revenge. Leave that to the righteous anger of God. For the Scriptures say,

“I will take revenge; I will pay them back,” says the Lord.

Instead, “If your enemies are hungry, feed them. If they are thirsty, give them something to drink. In doing this, you will heap burning coals of shame on their heads.”  Don’t let evil conquer you, but conquer evil by doing good.