How Does Trump Match Up With Evangelicals? 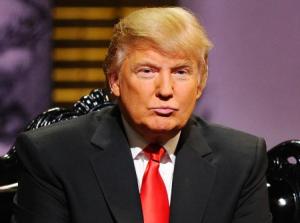 According to an article by Sarah Pullium Bailey of the Washington Post on “Debate Day”, Donald trump has a powerful lead with Evangelical voters compared to all of the other candidates. While affirming the early lead the Trump has in what they call the “Reality TV phase”* of this election cycle, for the most part the lead among Evangelical voters is one that hasn’t begun to take shape. The article illustrates just how tenuous Trump’s hold on the Republican nomination is. 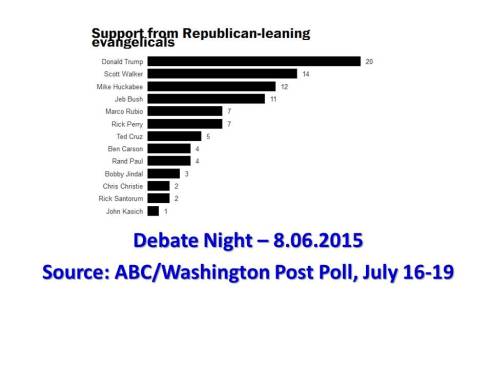 This is a point in the election cycle when the media-hype is the only real information that voter have. You can imagine that, by the time the primaries begin, Trump will be thoroughly vetted whether he likes it or not. It is in the vetting that the media, and the public, will have a clearer understanding of how “the Donald” is being accepted by Evangelicals. Many questions from this vetting process are unanswered. OnTheIssues.org offers a resource that gives voters a window on where candidates stand “On The Issues” One considerably large concern for Evangelicals is on the issue of unborn rights. Here are the stances that Donald Trump has taken on this issue:

• I changed my views to pro-life based on personal stories. (Apr 2011)

Evangelicals are one of the largest advocates for education reform and school choice, often opting out of public schools completely and preferring home-schooling. On education, Trump has several positions that would require vetting:

“Focus on the Family” is more than just the title to a popular radio broadcast. It is among the top priorities for Evangelicals, and here Mr. Trump’s record appears to be somewhat thin. His focus, however, on working for a living, may buoy his family credentials.  He has positions that do show compassion, but also a need for being industrious, both strong biblical principles. It is also worth noting that Evangelicals are not big fans of gambling, and Trump is a casino mogul. Still, he has made recent statements regarding families.

The Donald has two other very large hurdles, and the first debate could help him establish himself with a very important voting bloc in the early, conservative-leaning states; Evangelical leadership and ability to defeat the politically adverse Democrat in the general election. The Washington Post article focused on both of these topics, the first being how the Evangelical leaders evaluate Trump’s record and his answers. The Post quoted Russell Moore of the Southern Baptist Convention’s ELRC,

“I haven’t talked to a pastor yet who is supporting Donald Trump,” said (Russell) Moore, president of the Ethics and Religious Liberty Commission…”*

Additionally, the staying and winning power of the candidates. Bailey notes,

“Evangelicals will look for a candidate who seems to represent them on issues like religious liberty and abortion, but they will also look for someone who can eventually win, said Thomas Kidd, a history professor at Baylor University.”*

OnTheIssues.org considers Donald Trump to be a “Hard Core Conservative” on the issues. If he acquits himself well in the debates, he just may capture the Evangelical votes he needs to move into 1600 Pennsylvania Avenue.