Racism – Yes, Christians need to have a talk.

Perhaps one of the most emotionally polarizing topics we deal with is racism. It is an old, excoriated wound on the hide of humanity. Racism has created divides, conflicts and violence for thousands of years. It’s a topic that is usually heart-sickening, but it can also be heart-warming. Occasionally we get it right; God’s love shines so brightly through someone that the shadows of racism disappear. If we are going to live as followers of Immanuel (God with us), we really need to look deeply at what Scripture tells us about this subject. Then, we need to hold Scripture alongside of an honest self-examination and see how we measure up. To some extent, we all fall short, and we can all do better.

While there may be preachers that thrive on talking about race, most of the pastors I know meekly avoid the subject. It’s not as much that they are scared of the topic, as it is that there is plenty of other stuff to talk about… why scratch the scab off of that wound? While I understand that logic, I cannot see how we can live in such a racially diverse country and not discuss it in a blog about applying our faith. The biblical worldview looks at everything that affects us, applying the Word to the convenient topics, as well as the difficult ones. Let’s look at a lesson on racism that was taught to all of those around the writer of God’s Law – Moses.

Couched in a lesson about sedition against God’s will and chosen representatives is a lesson about racism. Moses’ siblings Aaron and Miriam are upset because of their perception that Moses had taken wrongful latitude because of his position with God. Scripture tells us:

Numbers 12:1 (NLT)
While they were at Hazeroth, Miriam and Aaron criticized Moses because he had married a Cushite woman. 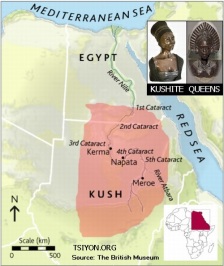 They began their mutiny by attacking Moses for the race of his recent bride; a woman from Cush. Cush was often used as a name for Ethiopia, but may also mean the woman was from a distant Arab tribe. Either way, the attack came couched in racism, because they believed they were not privileged by God to speak directly to Him:

Numbers 12:2-5 (NLT)
They said, “Has the LORD spoken only through Moses? Hasn’t he spoken through us, too?” But the LORD heard them. (Now Moses was very humble—more humble than any other person on earth.)
So immediately the LORD called to Moses, Aaron, and Miriam and said, “Go out to the Tabernacle, all three of you!” So the three of them went to the Tabernacle.
Then the LORD descended in the pillar of cloud and stood at the entrance of the Tabernacle. “Aaron and Miriam!” he called, and they stepped forward.

Clearly, the wrath of God is coming, and Aaron and Miriam are about to “get it”. The Hebrew context of the punishment means a lot in the imagery – not only will they be punished for their sedition, but it would be in context of their racism.

Numbers 12:9-10a (NLT)
9 The LORD was very angry with them, and he departed. As the cloud moved from above the Tabernacle, there stood Miriam, her skin as white as snow from leprosy…

Miriam, apparently the ring-leader of the seditious path, would spend 7 days stricken “white as snow” with leprosy and banished outside the camp. Although he and his wife were the victims of racism and mutiny, Moses intercedes for Miriam, and her leprosy is healed allowing her to return to the tribe’s camp. Equally with the penalty for racism, the prideful envy was punished in vivid colors.  God did the calling out and humiliating.

Focusing on the racism depicted in this passage, we find that God penalizes Miriam in a way that makes her look different. But beyond looking different, she has contracted one of the most horrific ailments of this period in history; a disease that will kill her by rotting her flesh off. God made a statement in living color about the sick and sad outcomes that pridefulness leads to. Racism hinges on pridefulness. When one puts down another race, they are attempting to elevate their own. In reality, racism illuminates the insecurity of the one who calls out someone who looks differently. The root of the problem is pride.

Pride and pridefulness are two different things in 2015 English. Today, we take pride in a job well done, we dress with pride in our appearance and we are proud of our children. Biblically, you will find “pride” used in a negative way that we would more likely call pridefulness today. In the Bible, pride is usually ugly.

Proverbs 21:24 (NLT)
Mockers are proud and haughty; they act with boundless arrogance.

James 4:6 (NLT)
But he gives us even more grace to stand against such evil desires. As the Scriptures say, “God opposes the proud but favors the humble.”

Pridefulness gives us the arrogance to think of ourselves as better than someone else, and that is the core of racism. God’s tell us that it is a mindset of “boundless arrogance”, “God opposes” the proud, and it “ends in humiliation.” Such is the end of racism. And it is at this point that we need to define racism because of its heart, but we need to use care that we don’t turn the victim of racism into a prideful person. The answer to racism, just like any other form of pridefulness is to see that God opposes it and we let Him bring it to its humiliating end.

In the United States, we are seeing an answer racism that is actually as ugly and prideful as the racism itself. Prideful individuals, often thought-leaders, are using allegations of racism as a weapon toward political enemies. College ethnic studies courses fan the flames of racism, and pridefully assert that they have the answer to it.  Instead of letting God oppose and humiliate racists, thought-leaders are engaging political opponents with a racial chip on their shoulders, and then playing the “race card”. The net effect of pridefully abusing race for political or financial gain is that it dis-empowers its accusation. People who assume the role of God, as judge and administer of justice for fabricated racial offense reduce the effectiveness of God’s humiliating actual racists.

It is very hard for a Christian to be an effective witness for Jesus Christ if they are fixated on matters of race. God made each of His creations on purpose, with a plan for their life. How dare we see a brother or sister as anything less than God’s cherished creation? Even if we are confronted by or suspect a racial motivation in an action or a reaction, we have no place taking over God’s role. He is the one who opposes and humiliates a racist, not us. A Christian really has no business caring about race, as we see from Paul’s message to the church in Colossi:

Colossians 3:10-11 (NLT)
Put on your new nature, and be renewed as you learn to know your Creator and become like him. In this new life, it doesn’t matter if you are a Jew or a Gentile, circumcised or uncircumcised, barbaric, uncivilized, slave, or free. Christ is all that matters, and he lives in all of us.

This is where I stick my neck out as a preacher. I have no place judging another preacher, but I do feel compelled to give the readers of this blog my perspective of questionable shepherding. If a preacher is calling out races from the pulpit, who are they really speaking for? For that matter, if your brother or sister in Christ is calling out races, is it really their new creation speaking, or is it the old nature of their sinful flesh?  It is hard, but it is biblically sound to love people who mistreat you… even in matters of race.  Jesus didn’t preach social justice, but rather love and forgiveness.

Any of us can fail. In my life, I certainly have failed… well more than my fair share. It is in the nature of our flesh to fail, but it is in the nature of our Lord to forgive. If we are a witness to racism, a victim of racism, or a victim of manufactured racism or opportunistic race-baiting, our flesh desperately wants to be judge and executioner. But God has already told us that it is not our place. Our place is to follow the example of our Lord, Jesus Christ. It is only when we follow his example that we get it right; God’s love shines so brightly through us that the shadows of racism disappear. Let’s leave this discussion with some of the Apostle Paul’s advice on how to do that:

Philippians 2:3-9 (NIV)
3 Do nothing out of selfish ambition or vain conceit, but in humility consider others better than yourselves.
4 Each of you should look not only to your own interests, but also to the interests of others.
5 Your attitude should be the same as that of Christ Jesus:
6 Who, being in very nature God, did not consider equality with God something to be grasped,
7 but made himself nothing, taking the very nature of a servant, being made in human likeness.
8 And being found in appearance as a man, he humbled himself and became obedient to death– even death on a cross!
9 Therefore God exalted him to the highest place and gave him the name that is above every name…