I spend a lot of time in counseling, and leading a broad-spectrum recovery ministry.  This has left me a little rusty in academics since I graduated seminary in May, 2013.  I started blogging 6-weeks ago, and it really rekindled an interest in a host of areas that I studied over the 3 years of seminary, but many I haven’t used in a while.  An interesting negative happened that I decided to turn into a positive, and stretch my academic legs as well.

I was visiting a blog that I have been following, Isaiah 53:5 Project, using as a mentor in blogging.  I found one commenter on James’ blog who was factually wrong and very profane.  I responded to his comment, and he redirected his attention to me.  The blogger is from South Africa, and goes by Arkenaten.  In an obtuse manner, “Ark” asked about my faith, so I sent him to a blog posting I had written about my testimony.  I’ve never been trolled by an actual, dedicated troll, but that changed after Ark read the testimony of my salvation.

Ark made disparaging comments right after reading my testimony.  He even stated “So I guess that means your Dad is in Hell.”  I looked the guy up, and to my surprise discovered that there is indeed such a thing as a serial troll.  The amount of production this person posts far and wide throughout the internet is astounding.  I Googled page after page of results of trolling after trolling.  Ark couldn’t possibly have a job with the immense volume of trolling he does… I put a few pages of results at the bottom of this posting just to give you an example. 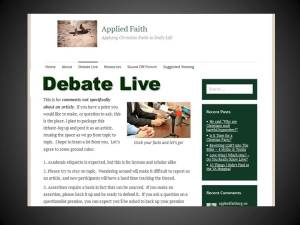 I decided before he got out of hand, I would set some reasonable academic rules and just see where Ark might take his trolling, so I created a new page, “Debate Live”, night before last.  He may actually let his guard down and I might have an opportunity to share the gospel, over time.  I dropped the link in James’ response feed… around that same time, James gave me a courtesy “head’s up” that the guy had a really bad history.  I would later learn that Arkenaten , and his friend John Zande, were rather famous for rock-headed, redundant atheism.  They never prove a point, and drone on repeatedly in circular comments that never address the facts of the debate.

I thought, surely, if you give them solid academic proof, they will at least take it in and respond.  Hopefully, the truth might jar them into a position where they could possibly let the Holy Spirit in through the smallest crack in the armor on their hearts.  Maybe if they just took a moment to let the light of Scripture in, good could come out of responding to people who were really rude and profane.  The writer of Hebrews teaches,

Hebrews 3:7-9 (ESV)
7 Therefore, as the Holy Spirit says, “Today, if you hear his voice,
8 do not harden your hearts as in the rebellion, on the day of testing in the wilderness,
9 where your fathers put me to the test and saw my works for forty years. 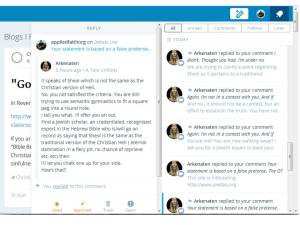 I launched “Debate Live” on my page, wrote an introduction, and presented a case that Ark had expressed an interest in, and set some minimal ground rules, then went to bed.  When I woke up this morning, I noticed a message from Isaiah 53:5 Project on my WordPress app, so checked it out.  James let me know that Ark had found the forum (Now “Working Good Soil” in the menu of this blog site). He and his friend John were trashing me in the forum while I slept… classy, don’t you think?

I dug into their comments, and quickly discovered that they paid virtually no attention to the ground-rules of the forum.  Ark and John had already blasted away with assertions, no facts, no references, no citations, no debate by the most minimal academic standard…. 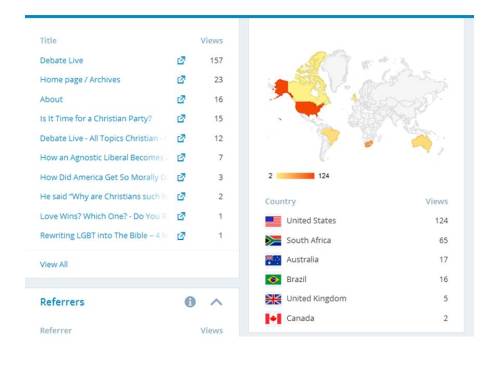 At least they took to heart the part about no profanity… I may be the only blog they didn’t cuss at.  Relentlessly, they demanded knee-jerk responses to broad, deep questions.  In one day, there were 157 views on the new page, and 65 of them were from South Africa.  Ark posted around 30 hounding questions over the course of one day, none of them up to any thoughtful level of debate.  Never acknowledging the facts and references, they repeated the same errant demands.  There were lots of circular questions…. then finally, Ark responded with two links to un-sourced, anonymous web-pages where unknown authors posted personal opinions.  It gave me an opportunity to land some Scripture on the table.  Small win.

The debate topic was about hell.  Not to re-cover the same ground, but Ark asserted that Hell is not an Old Testament concept, and that Jesus never said anything about Hell.  He asserted that the early church made up the whole idea.  I put together a response that included 9 pieces of Scripture, directly refuting Ark.  I discovered that their cycle of demand, ignore, insult, rinse-repeat was worthless.  No “good soil” could be reached, because these two hardened paths would never take seed.  Why did I give them the time? 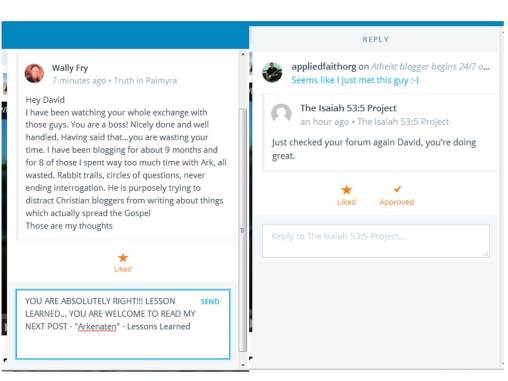 The process went on through this day.  It finally dawned on me, when fellow Christian bloggers encouraged me, my wife questioned the time I was investing, and the attention the experiment took.  I was wasting my time with Ark and John.  I did, however learn, that there are other bloggers who really banded together and gave me encouragement.  From their learned positions, it was obvious that their experience was about the same as mine.  I was spending a lot of time trying to tend bad soil, as Jesus taught.

Matthew 13:3-9 (ESV)
3 And he told them many things in parables, saying: “A sower went out to sow.
4 And as he sowed, some seeds fell along the path, and the birds came and devoured them.
5 Other seeds fell on rocky ground, where they did not have much soil, and immediately they sprang up, since they had no depth of soil,
6 but when the sun rose they were scorched. And since they had no root, they withered away.
7 Other seeds fell among thorns, and the thorns grew up and choked them.
8 Other seeds fell on good soil and produced grain, some a hundredfold, some sixty, some thirty.
9 He who has ears, let him hear.”

What I learned about hardened hearts is this.  Jesus teaches us that they are bad soil, and they just will not hear, because they have no ears to hear.  I really wanted to be an optimist, but I have to be a realist.  It was a great experiment, though.  I learned that there is a great community of believing bloggers… thank you for your support and encouragement… you are salt and light.

1 Thessalonians 5:9-11 (ESV)
9 For God has not destined us for wrath, but to obtain salvation through our Lord Jesus Christ,
10 who died for us so that whether we are awake or asleep we might live with him.
11 Therefore encourage one another and build one another up, just as you are doing.

This posting is a companion posting to the menu title “Working Good Soil”.  It was worth doing; I learned a lot.  This posting is here to give fellow Christian bloggers some insight into my experience.  I hope you find it informative as you continue to share the gospel with a world that dearly needs what you do.

And Ark, since I am sure you will read this, it is moderated, and you’re not invited.  Troll elsewhere.  Here are some of the many examples of Ark’s Google reputation.